“I stepped closer to that last bassinet and dared to peek over the edge.”

As the door opened in front of me I was gently pushed into the darkness from behind. As I squeezed through the opening the door was pulled shut quietly behind me. I stood there for a moment listening to the quiet while my eyes adjusted to the dimmer light in the room. It seemed almost peaceful in that
room, if only there hadn’t been an uneasiness spreading throughout my lower back, at the same moment as the lighting appeared to brighten up.

To the left of me I saw a tidy row of bassinets lined up in front of a tiny window that was letting in what little light there was into the room.

I took a small step forward toward the row of the bassinets. It was eerily quiet, the uneasiness started to turn into dread as I took another step forward. Then I took another and suddenly I was standing in front of the first one in the row.

Tentatively I peeked over and into the bassinet. Lying there swaddled in a tiny blanket was a baby that looked to be no bigger than just a couple of weeks old. My nerves softened as I heard it do a little coo in it’s sleep. Staring at the little baby I felt drawn to it as if I was being pulled closer to the bassinet.

I leaned down to get a closer look when the baby suddenly turned towards me and sat straight up, as if it were an adult, just inches from my face and opened it’s eyes. There was just blackness where the eyes should have been. I was frozen just staring at what was happening before my eyes when it opened its mouth and whispered something.

I couldn’t hear what it said and felt myself leaning even closer into the bassinet and staring straight into the bottomless pit of its eyes, and heard it whisper again, this time I heard what it said.

I leaned up and took a step back and the baby laid right back down in it’s tight swaddle and looked as if it hadn’t been disturbed at all. I took another step back and looked at the rest of the row of bassinets. There had to be 10 there in the entire line. I took a tentative step towards the next one and dared to
peek over the edge.

This baby appeared to be at least a couple of months old. Also wrapped tight in a cute little blanket, looking cozy and peaceful sleeping. Again I felt myself start to relax and smiled to myself as I leaned in closer. Then this baby shot straight up, it appear so unnatural, it just turned it’s head to me. It opened it’s dark abyss of eyes and out loud said to me the same phrase.

I cringed back a few steps. The baby instantly laid back down as if it hadn’t been disturbed either. What was going on in this room? Why was I hear? What was I supposed to do with these babies?

Turning around full circle I noticed there was nothing else in this room other than the bassinets and the tiny window. The corners were so dark and full of shadows. I took a few steps back the way I had come to leave out the door I had entered, and realized I couldn’t even find a door to go out of. Where had
it gone? I searched for the hinges along the wall, for anything that could get me out of this room.

It felt stuffy, as if there was something heavier in the room with me right then, frantic I dropped the heavy book that I had been holding, which I didn’t even realize I had been holding until that moment. On my knees I looked anywhere along the floor to try to find a gap that could be the door when I heard another whisper.

I froze. It was so softly spoken, but I could hear what it said plain as day. I slowly stood up and turned back towards the bassinets. I took a few careful steps toward the line. As I approached the first two I glanced in them again, they were still there sleeping soundly as if nothing had happened. Nearing the
third I carefully glanced in, this one also appeared to be a couple of months old. I walked right on by it and the others, as I went to the end of the row.

Coming up on the last one I could see this side of the room a little better, because of the little light that was still being let in through the tiny window. It looked just like the rest of the room, nothing else in it except darkness and shadows. Glancing back at the beginning of the row it seemed as if it was ten miles away, yet also appeared to be right there.

I stepped closer to that last bassinet and dared to peek over the edge.

This baby was older, but couldn’t have been older than 6 months I would guess. Also sleeping soundly and swaddled up. This one’s blanket was all black and appeared to be swaddled pretty tightly. I could barely see it’s little face. Daring to get closer I inched toward it to try to loosen the swaddle a little
bit. It just seemed too tight.

I slowly put my hand into the bassinet and even slower reached for the swaddle, being careful to not touch the bassinet itself and possibly disturb the baby. As soon as I touched the swaddle blanket I felt an iciness rush throughout me, it was so freezing. I gasped and pulled my hand back. Glancing back around
me I could see the tiny window was now frosting over and the little light that was being let in was now slowly disappearing.

As I looked back to the bassinet I gasped again as the baby was standing there in the bassinet staring at me with the same all black abyss-like eyes. The room was almost completely dark now and I could barely make out that the swaddle was crumpled at it’s feet.

It raised it’s arm towards me with it’s little finger pointed directly at me. It opened it’s mouth and in the tiniest of whispers said 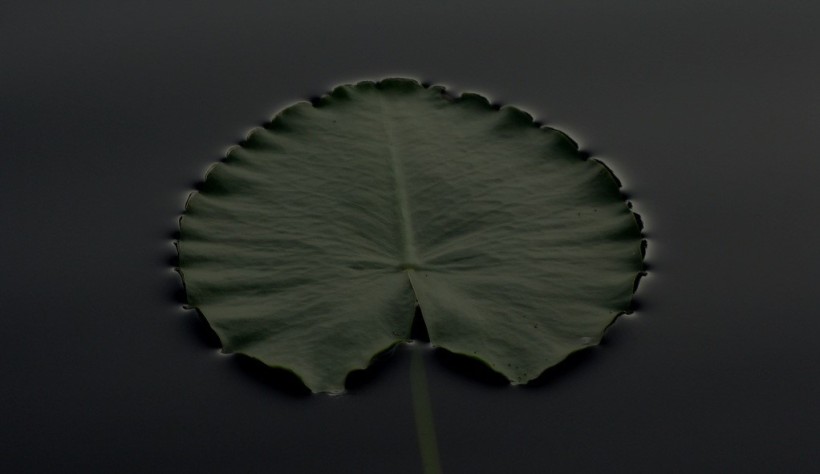 I dropped to my knees and felt a relief wash over me, but my eyes stayed on the lily pad.

I stood there on the edge of the water, the silence surrounded me as thick as a blanket. All was still, the water didn’t move, no rustles in the trees, just silence. I would have thought it felt peaceful, if it didn’t feel so thick. I understood the phrase, “you could cut the air with a knife” a bit more in that moment.

I couldn’t take my eyes off of it. Something was drawing me into it. It pulled so, that I’d blink and try to be more aware of my surroundings, but couldn’t lift my eyes. I was listening hard for even a small chirp from a bird or that lovely song the crickets made at nightfall. I could have sworn it had just been bright as day, but now the sun was setting. My eyes stayed on a single lily pad while I tried to tune in my other senses. I could feel the temperature drop a few degrees as the sun continued to set. What was it about this lily pad? My brain was fuzzy and I couldn’t seem to think straight. How long had I been standing there for? It sure was getting colder and seemed to be getting even quieter. How was that even possible?

Where had I been going? What had brought me here? This is so bizarre, my brain seems so fuzzy right now. I can’t stop staring at it, blinking again I couldn’t lift my arms to rub my eyes, they felt like they were burning, burning so strongly. The sun seemed to have set completely now, but the pond was giving off some type of radiating light, or at least it appeared to be. It was freezing now, I thought I was shivering, how long had it been again? It was floating there, right in the pond, a single lonely lily pad in the small pond. Where was this pond again? I can’t for the life of me remember where I was or what I had been doing, I just knew that this lily pad was there FOR me. What was I to take from this?

I felt a pain in my legs, I realized my entire body was shaking, I dropped to my knees and felt a relief wash over me, but my eyes stayed on the lily pad. I could hear the water lapping at the shore, but hadn’t it just been quiet a second ago? I sense an excitement, having heard some type of noise within the thickness of the silence just a second ago. The lily pad appeared to be getting closer, that was a good thing right? My mind couldn’t seem to form any other functioning thought at this moment, my focus on the other senses gone, all I could see was that the pad was actually just getting bigger. I felt that was a good thing, but I did feel even more of a coldness throughout my body, a deep deep coldness that I could feel within my bones. Another phrase I now understood with more clarity. I chuckled to myself and almost jumped at a noise. Noise! Was that caused by me? The silence felt so powerful that it felt like I was almost being pushed down.

Down. I did feel like I was being pushed down. What a peculiar feeling right now. My neck felt strained as it continued looking at that lily pad. Was it even bigger now? My neck was killing me even more now. The lily pad HAD to be closer.

Where did it go?

Follow The Phantom Rem on WordPress.com
Join 431 other subscribers

“What would an ocean be without a monster lurking in the dark? It would be like sleep without dreams.” ~Werner Herzog